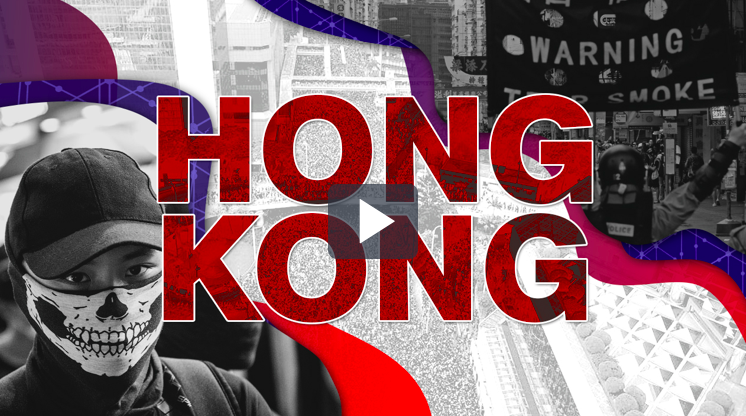 The Hong Kong protests represent a major challenge not only to the authorities of Hong Kong itself, but also to Beijing, due to both their protracted nature and a high level of organization resembling the Kiev Maidan of 2013/14.

The Hong Kong rioters have gone so far as to produce and disseminate a veritable urban warfare manual describing in detail the division of labor between the close-combat fighters, ranged-weapon fighters, as well as various support roles. Their “Plan A” appears to be, as cynical as this may sound, to provoke bloodshed by inducing local law enforcement to use firearms against the rioters.

Speaking on behalf of Hong Kong Federation of Women，Pansy Ho condemns the increasingly escalating acts of the Hong Kong radical protesters during the dialogue with the UN High Commissioner for Human Rights at the 42st session of the Human Rights Council. #pansyho #HongKong pic.twitter.com/wiIKAqWC7X

Thus far this has not come to pass. On the one hand, Hong Kong police has displayed considerable self-restraint, and their rules of engagement seem to favor withdrawal and disengagement when faced with superior numbers of rioters. On the other hand, irrespective of the will of the riot planners, the actual rioters have, again thus far, displayed healthy self-preservation instincts. In the few cases where firearms were brandished by Hong Kong police, usually in cases of police officers finding themselves surrounded by the raging mob, the sight of weapons proved enough to compel the rioters to withdraw. That by itself, however, will not solve the problem of riots because there also seems to be a “Plan B.” Whereas, for example, the Kiev Maidan was largely confined to the Maidan Square itself, the geography of Hong Kong riots is much more extensive and unpredictable. Hong Kong rioters have not shrunk from attacking strategic infrastructure, including the now-infamous occupation of the Hong-Kong International Airport that caused massive air traffic disruptions.

Hundreds of #HongKong residents gathered at IFC shopping mall in Central on Thursday noon to sing the Chinese national anthem to support a man who had been beaten by anti-government protesters Wednesday night. #香港 https://t.co/oJ6QSd2wMi pic.twitter.com/A7xwehKj0v

Likewise the violent riots in popular malls and tourist destinations all over the Hong Kong area have had the effect of depressing tourism and even prompting fears of a capital flight. While so far there are no indications of a lasting effect on the enclave’s economy, this is due to the still-lingering perception the unrest is a temporary phenomenon. Should it continue with present intensity, or, worse, escalate in terms of numbers of participants and methods used, there will be severe negative effects. For these reasons, China’s authorities cannot hope to win through a war of attrition, or expect that an escalation of violence will somehow cure this problem. There are genuine underlying problems in Hong Kong which have made themselves visible through these demonstrations.

As with other “color revolutions”, the Hong Kong protests have tapped into a deep vein of discontent within the population. In this instance, rather than poverty or corruption or even the institutional design of Hong Kong’s government, the banal problem facing the average Hong Kong resident is the extremely high cost of living combined with the highly visible class divisions. Since this “special administrative region” of People’s Republic of China represents a major concentration of financial industries, it is also home to massive wealth which, alas, does not appear to be trickling down. While there is also considerable wealth inequality in China proper which is expanding its list of billionaires at a steady pace, the less well-off Chinese urban-dwellers have the option of migrating from city to city in search of better opportunities. But that option is not one the average inhabitant of Hong-Kong is likely to adopt. Moving to China proper would run counter to the strong local Hong Kong identity, and moreover represent a move to a considerably less wealthy part of the world. Thus while the average Chinese citizen is unlikely to exhibit much sympathy for the plight of the protesters from the special administrative area, Hong Kong residents do not evaluate their well-being in comparison with mainland China. For them, the only relevant reference is Hong Kong itself.

One should also note that the violent component of Hong Kong protests is disproportionately composed of young men in their late teens and twenties suggesting the influence of a generation gap and the breakdown in the intergenerational social contract. While Hong Kong, if it were a sovereign state, would have one of the world’s highest life expectancies, its population is rapidly aging due to the low birth rates of the past several decades. A large age cohort is nearing the retirement age, placing a significant financial burden on the considerably smaller younger generation.

Further complicating matters for Beijing is Western powers’, and principally the US, interest in using Hong Kong as an instrument in the gradually escalating confrontation between East and West. The rioters’ awareness of their foreign audience was made plain by the displays of US flags as well as the flags associated with Hong Kong’s British colonial past. From the US perspective, crippling Hong Kong economically would inflict serious damage to China’s economy and also badly dent its political image.  Entirely unsurprisingly, Western governments and media wholeheartedly endorsed the protests while turning a blind eye on the increasing violence perpetrated by Hong Kong’s urban warriors who make no bones their aim is to provoke security forces to spill demonstrators’ blood. It is not difficult to predict what kind of Western reaction would follow: sanctions on Hong Kong officials, financial institutions, perhaps even on top Chinese leadership.

The media outcry would be so large that countries thus far unwilling to jump on the anti-Huawei bandwagon would find it difficult to maintain that position. It is evident the Trump administration is raring for a pretext to break as many ties between United States and China as possible, and also to force third countries, most notably the states of the European Union, to choose continued economic integration with United States or with China—but not both.  Furthermore, Hong Kong’s financial institutions have played an important role in furthering China’s economic objectives in the last several decades. In addition to playing a role of a major supplier of financial investments, they also  are China’s “invisible hand of the market”. While today China’s economy is far less dependent on Hong Kong, thanks to several “special economic zones” such as Shenzhen located only a short distance from Hong Kong itself, a major crisis in Hong Kong would reverberate throughout China.

Fortunately, there appears to exist a key difference between the Kiev Maidan and the Hong Kong protests, namely the absence of a wealthy oligarch or oligarchs pursuing a reactionary political agenda. None of the Hong Kong business elite have given any indications of supporting the rioters’ more radical agenda, nor is there evidence of their contacts with Western diplomats or intelligence services. It is doubtful such contacts would escape the attention of China’s counter-intelligence services, and China’s political leadership is unlikely to show the sort of timidity Ukraine’s President Yanukovych did in a similar situation, to his own chagrin.

One Country, One System?

The current “one country, two systems” paradigm unfortunately lies at the core of Hong Kong’s current troubles. The establishment of an economic enclave, with little labor mobility across this veritable intra-Chinese border, turned Hong Kong into a political pressure cooker. Its political autonomy in turn meant policies that favored the economic elite, causing the growth of wealth inequality which contributes to the high level of the local government’s unpopularity, to the point it has become a liability for Beijing itself. In the short term, Beijing will likely be forced to funnel considerable financial resources into Hong Kong to relieve the social pressures. In the longer term, however, a lasting solution will require not only a more close oversight of Hong Kong’s social policies, but also promotion of two-way migration between China proper and Hong Kong.

Note to readers: please click the share buttons above or below. Forward this article to your email lists. Crosspost on your blog site, internet forums. etc.

Additional: the major role of the National Endowment for Democracy

“Another video to counter the relentless lies disseminated by the US Empire and its “democracy” allies. It’s elementary stuff to those who follow Hong Kong affairs, but a useful and revealing summary for interested others.  The video, made by a HK lawyer, contains many key details and other evidence of the plentiful links between Washington and HK’s turmoil. A message from the producers:

“The video below was produced by a lawyer in HK who is very angry at the reporting done by the Western media. She asked to show it to people all over the world so they know the truth of what is happening in HK. Please take a few minutes to watch the truth. Thank you.”

Also Raed Saleh of UK FCO-incubated White Helmets – Al Qaeda auxiliaries in Syria – seen in Berlin at a conference organised by BILD with Joshua Wong.  I had predicted the White Helmet global franchise in early 2018. 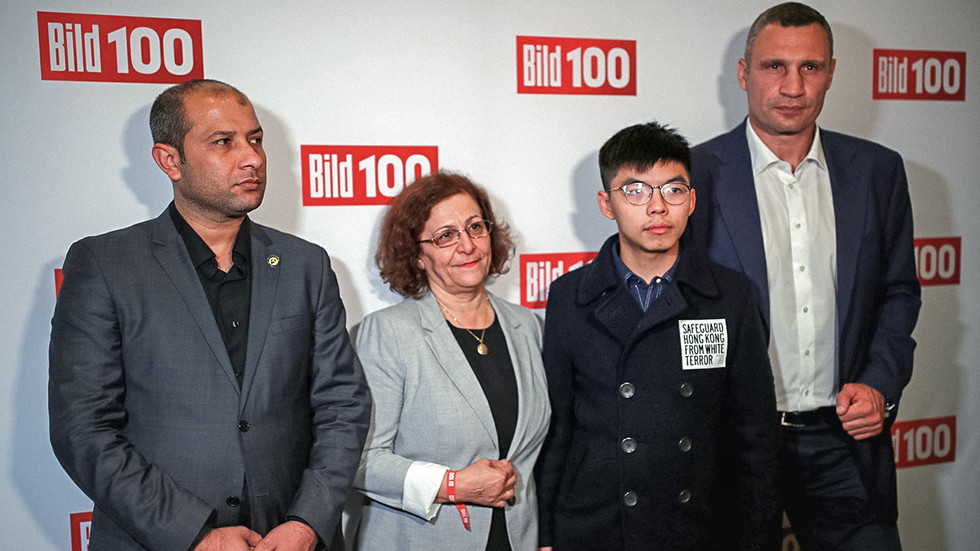 Click here to find the source of these notes as originally posted by Vanessa Beeley on her website The Wall Will Fall.