“America is an ideology that is unique because its main feature is its denial that it is an ideology. It’s both conservative and it’s liberal. And it’s right, and it’s left. And Barack Obama is its embodiment.”

This is the assessment of John Pilger taken from a speech entitled “Empire, Obama and America’s Last Taboo” which he delivered in San Francisco shortly after Obama’s first inauguration in 2009.

“In a sense, Obama is the myth that is America’s last taboo. His most consistent theme was never change, it was power.”

“Obama’s very presence in the White House appears to reaffirm the moral nation — he’s a marketing dream — but like Calvin Klein or Benetton, he’s a brand that promises something special, something exciting, almost risqué. As if he might be radical, as if he might enact change… he’s a postmodern man with no political baggage — and all that’s fake.”

John Pilger – Obama and Empire from International Socialist on Vimeo.

The sycophancy ran like a polluted babbling brook through page after page. “He was a vulnerable figure in many ways … But the grace. The all-encompassing grace: in manner and form, in argument and intellect, with humour and cool … [He] is a blazing tribute to what has been, and what can be again … He seems ready to keep fighting, and remains a formidable champion to have on our side … … The grace … the almost surreal levels of grace …”

I have conflated these quotes. There are others even more hagiographic and bereft of mitigation. The Guardian’s chief apologist for Obama, Gary Younge, has always been careful to mitigate, to say that his hero “could have done more”: oh, but there were the “calm, measured and consensual solutions…”

None of them, however, could surpass the American writer, Ta-Nehisi Coates, the recipient of a “genius” grant worth $625,000 from a liberal foundation. In an interminable essay for The Atlantic entitled, “My President Was Black”, Coates brought new meaning to prostration. The final “chapter”, entitled “When You Left, You Took All of Me With You”, a line from a Marvin Gaye song, describes seeing the Obamas “rising out of the limo, rising up from fear, smiling, waving, defying despair, defying history, defying gravity”. The Ascension, no less.

I will only reprint extracts of Pilger’s latest article since I very much encourage readers to follow the link and read it in full. His anger is palpable, but, as always, Pilger is fluent and restrained. It is with facts that he accuses Obama and with genuine dismay that lambasts that entourage of liberal toadies who are today putting the final touches to their hagiographies.

According to a Council on Foreign Relations survey, in 2016 alone Obama dropped 26,171 bombs. That is 72 bombs every day. He bombed the poorest people on earth, in Afghanistan, Libya, Yemen, Somalia, Syria, Iraq, Pakistan.

Every Tuesday – reported the New York Times – he personally selected those who would be murdered by mostly hellfire missiles fired from drones. Weddings, funerals, shepherds were attacked, along with those attempting to collect the body parts festooning the “terrorist target”. A leading Republican senator, Lindsey Graham, estimated, approvingly, that Obama’s drones killed 4,700 people. “Sometimes you hit innocent people and I hate that,” he said, but we’ve taken out some very senior members of Al Qaeda.”

Like the fascism of the 1930s, big lies are delivered with the precision of a metronome: thanks to an omnipresent media whose description now fits that of the Nuremberg prosecutor: “Before each major aggression, with some few exceptions based on expediency, they initiated a press campaign calculated to weaken their victims and to prepare the German people psychologically… In the propaganda system… it was the daily press and the radio that were the most important weapons.

Take the catastrophe in Libya. In 2011, Obama said Libyan president Muammar Gaddafi was planning “genocide” against his own people. “We knew… that if we waited one more day, Benghazi, a city the size of Charlotte, could suffer a massacre that would have reverberated across the region and stained the conscience of the world.”

This was the known lie of Islamist militias facing defeat by Libyan government forces. It became the media story; and Nato – led by Obama and Hillary Clinton – launched 9,700 “strike sorties” against Libya, of which more than a third were aimed at civilian targets. Uranium warheads were used; the cities of Misurata and Sirte were carpet-bombed. The Red Cross identified mass graves, and Unicef reported that “most [of the children killed] were under the age of ten”.

Under Obama, the US has extended secret “special forces” operations to 138 countries, or 70 per cent of the world’s population. The first African-American president launched what amounted to a full-scale invasion of Africa. Reminiscent of the Scramble for Africa in the late 19th century, the US African Command (Africom) has built a network of supplicants among collaborative African regimes eager for American bribes and armaments. Africom’s “soldier to soldier” doctrine embeds US officers at every level of command from general to warrant officer. Only pith helmets are missing.

The obsession with Trump is a cover for many of those calling themselves “left/liberal”, as if to claim political decency. They are not “left”, neither are they especially “liberal”. Much of America’s aggression towards the rest of humanity has come from so-called liberal Democratic administrations – such as Obama’s. America’s political spectrum extends from the mythical centre to the lunar right. The “left” are homeless renegades Martha Gellhorn described as “a rare and wholly admirable fraternity”. She excluded those who confuse politics with a fixation on their navels.

While they “heal” and “move forward”, will the Writers Resist campaigners and other anti-Trumpists reflect upon this? More to the point: when will a genuine movement of opposition arise? Angry, eloquent, all-for-one-and-one-for all. Until real politics return to people’s lives, the enemy is not Trump, it is ourselves.

What Bush had built, Obama afterwards sold to the disaffected with false promises and outright deception. By stealth and guile, he oversaw the continuation of the Bush years’ policies, and, moreover, advanced the normalisation of the selfsame neo-liberal/neo-conservative agenda: Wall Street bailouts, the surveillance state, the “war on terror”.

Thanks to the accelerated erosion of civil liberties (have we forgotten NDAA 2012?), the militarisation of police and the frightening escalation of the use of drones, Obama also opened the way for greater tyrannies to come. So we all have more reason to fear a future under Trump. But then the rise of Trump is surely Obama’s outstanding legacy.

Pilger’s scathing appraisal of Obama should be read in its completeness, if only as a necessary antidote to the eulogising of the liberal press.

Click here to read John Pilger’s complete article entitled “This week the issue is not Trump. It is ourselves.” 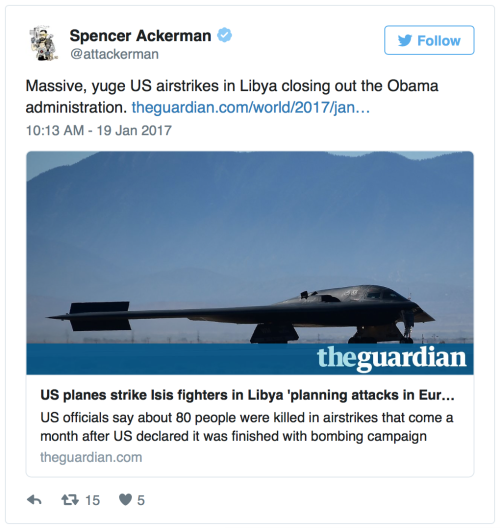 In a final act, Obama launched airstrikes near Sirte, Libya against ISIS targets in an attack which killed 80 people:

Incoming president Donald Trump, who takes office on Friday, is reportedly receiving aggressive but unspecified plans to intensify US war efforts against Isis. It is unclear if they focus primarily on the remaining Isis strongholds in Iraq and Syria or aim to reignite the Libya campaign as well.

From a report written by Spencer Ackerman and Chris Stephen and published in the Guardian.