“The relief of surviving my attempted murder by British security forces is exceeded only by their failure to frame me as a terrorist” — Stephen Travers, Miami Showband Massacre survivor.

On January 4th 2018, Stephen Travers was interviewed on The Pat Kenny Show | NewsTalk. The interview is embedded below along with extracts from a report by The Irish Times published on December 31st, 2017:

Miami Showband massacre survivor Stephen Travers says the Irish Government should be ‘getting answers’ from the British government about allegations emerging from State Papers.

Declassified documents from 1987, published earlier this week under the 30 year rule, revealed a letter stating British intelligence agency MI5 had supplied the Ulster Volunteer Force (UVF) with detonators “which they had set to explode prematurely”, as happened during the attack on the Miami Showband.

On July 31st, 1975, a minibus carrying five members of the Miami Showband, one of Ireland’s most popular touring cabaret bands, was flagged down at what appeared to be a British military checkpoint as they were travelling south to Dublin after a gig at the Castle Ballroom in Banbridge, Co Down. 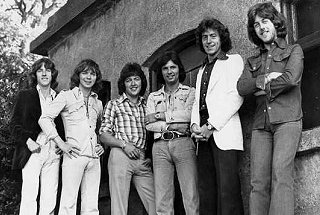 The UVF had planned to load a bomb on to the musicians’ bus and have it explode as they drove home. Two UVF men were killed by their own bomb as it detonated before they could plant it in the back of the band’s vehicle. Singer Fran O’Toole, guitarist Tony Geraghty and trumpeter Brian McCoy were then shot dead on a Buskhill country road by other UVF men.

Singer and saxophone player Des Lee and guitarist Stephen Travers were also wounded but survived. Three men, one former and two serving Ulster Defence Regiment (UDR) soldiers, were convicted for the murders. They were released under the terms of the 1998 Belfast Agreement.

Musician Stephen Travers hopes a new documentary on a notorious massacre in the north of Ireland during the Troubles will lead to justice almost 50 years later.

In a new Netflix documentary released later this month he says that the 1975 Miami Showband Massacre was not a random sectarian attack but was masterminded by British intelligence services.

Three members of the band, one of Ireland’s most popular, were killed in the attack by the loyalist paramilitary Ulster Volunteer Force (UVF).

They were heading to Dublin in their van when they were stopped by uniformed men at what looked like a random army checkpoint near Newry in Co Down and shot.

Bass player Mr Travers had only joined the band six weeks earlier. He tells how the “soldiers” fitted a bomb underneath the van which detonated early.

writes Steve Sweeney in an article first published by the Morning Star. The same piece continues:

Mr Travers believes the band was deliberately targeted due to its popularity among Irish nationalists.

He claimed the killings were masterminded by the loyalist paramilitary Ulster Volunteer Force’s brigadier Robin “the Jackal” Jackson, working closely with British intelligence services. At least four of the gunmen were soldiers from the British Army’s Ulster Defence Regiment (UDR).

The shady Glennane Gang, a secret informal alliance of loyalists who carried out killings of Catholics and nationalists, have been implicated in the killings. Members are thought to have acted as double agents for British military intelligence.

“We were targeted because the British wanted our government to seal the border so that the IRA wouldn’t be able to cross easily into the relative safety of the south after committing some sort of atrocity,” Mr Travers told the Belfast Telegraph.

He said the band would have been branded terrorists, with guns planted in the van, had the bomb not exploded early.

The Police Service of Northern Ireland’s historical inquiries team, which was disbanded in 2014, confirmed Mr Jackson’s involvement in the killings.

His fingerprints were found on a pistol used in the attack. But British army officer Robert Nairac was cleared of involvement.

Mr Travers, however, remains sceptical of the team’s findings, “because they were answerable to the British government.”

Nearly 50 years after the slaughter he hopes the new film will open the door to investigations into the killings.

Watch the trailer for the new documentary below:

Filed under did you see?, Ireland