the madness of King Donald is nothing new

On the day Trump was inaugurated as the 45th POTUS, I couldn’t help noticing something odd as the banner rolling at the bottom of BBC’s rolling news coverage momentarily froze. The letters B.R.E.A… had already scrolled left off the screen so we were left with a message that began …KING DONALD. Yes, imperial America has crowned the emperor it always wanted!

Unsurprisingly, the coronation of Trump caused many liberals and quite a few leftists to scratch their heads until their scalps were bleeding, such was the floundering search for answers. How on earth did this happen? Where did America suddenly go so wrong?

Such questions are perfectly good ones but ought to have been asked more than two decades ago. No useful answers can be gleaned when the inquiry begins with outright denial. The unpalatable fact is that America did not go off the rails all of a sudden about eighteen months ago, any more than its demise is the fault of the crafty Russians. America has been sick for a very, very long time and Trump is just the worst symptom so far.

It wasn’t Trump who attacked Iraq on a whim and slaughtered a million people. Nor did he first sanction the bombardment of Yemen now suffering the worst cholera outbreak in history.

It wasn’t Trump who opened Gitmo and the other ‘black sites’ where prisoners are held indefinitely in contravention to human rights and the Geneva Convention. Nor did he introduce ‘the free world’ to medieval throwbacks like extraordinary rendition (kidnap and torture), waterboarding (torture) and “rectal feeding” (torture and rape). And though soon after taking office he did direct the extrajudicial murder of American citizens, he was only following an earlier precedent set by Obama.

Trump is truly the heir and successor to Obama, who pursued the Afghan war into Pakistan, bombed the people of Libya to provide air cover for Islamist terrorists and future warlords, and expanded the “Global War on Terror” throughout the benighted continent (in his words “S-hole”) of Africa; who replaced torture with extrajudicial killings by drone attack, and who reneged on his promise to close Gitmo. But then, Obama was the fulfilment of Bush jr, who in turn should be prosecuted both for the illegal invasion of Iraq and for his gloating admission of America’s use of torture. Instead, Obama gave Bush his blessing and moved on.

Nor was Trump in office when the US covertly backed the coup d’état in Honduras in 2009 which saw the democratically elected leader President Manuel Zelaya ousted by a military takeover (that was Obama again), or when the White House provided support for the failed Venezuelan coup against Hugo Chavez in 2002 (Bush jr.), Nor did Trump instigate the overthrow of President Salvador Allende in Chile on September 11th 1973 (that was Nixon). Nor did he open the School of the Americas where during 1980s (especially under Reagan) Latin American despots trained their own thugs in torture techniques. He didn’t carpet bomb Vietnam, Cambodia and Laos, nor has he yet used chemical weapons such as napalm and Agent Orange against civilians (LBJ and Nixon). So it wasn’t Trump who made America sick, any more than it was simply Obama, Clinton, Reagan, Nixon, LBJ and Bush I and II combined. The rot set in long, long ago.

In fact US foreign policy has been unremittingly hawkish ever since it dropped atomic bombs on Japan at the end of the Second World War. Within a decade it was engaged in total war on the Korean Peninsula and had carried out clandestine regime change operations against the democratic governments of Iran (1953) and Guatemala (1954). Regarding the Korean War, Gen. Curtis LeMay afterwards said:

“We went over there and fought the war and eventually burned down every town in North Korea anyway, some way or another, and some in South Korea, too.”

“Over a period of three years or so, we killed off — what — twenty percent of the population of Korea as direct casualties of war, or from starvation and exposure?” 1

Today when Trump shakes his fist at Pyongyang, there is no context. North Korea remains part of Bush jr’s declared “axis of evil” and presumably we are expected to believe that its people still hate our freedoms. 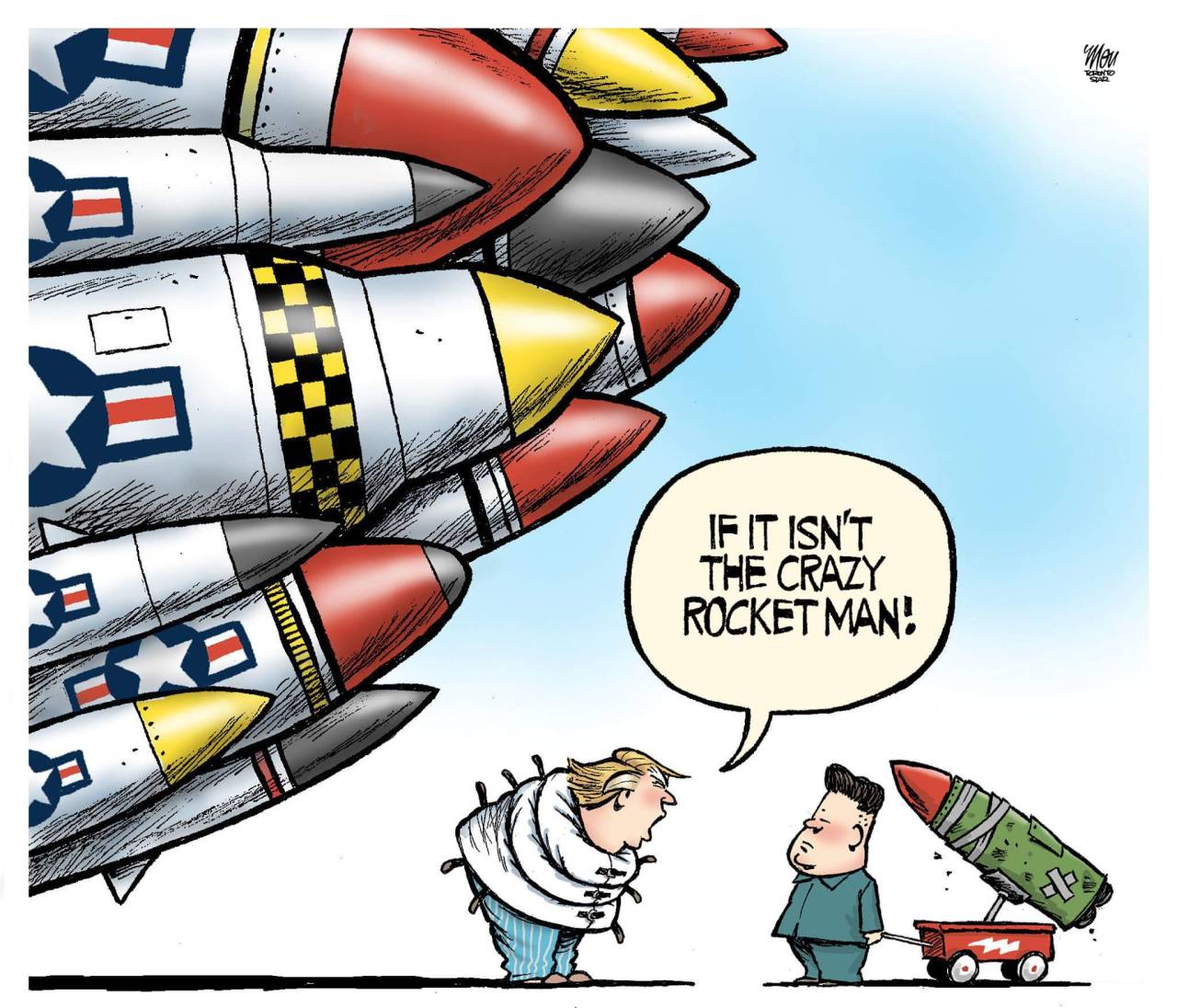 But then such obvious continuity in US foreign policy is unsurprising once we turn our attention to the powers behind the throne. Let’s begin with the CIA which was formed under the National Security Act of 1947 as a peacetime, non-military intelligence agency. Under Eisenhower, the agency’s first civilian head, Allen Dulles, worked alongside Secretary of State and rabid anti-Communist brother John Foster Dulles, and began with the overthrow of Prime Minister Mohammed Mossadegh of Iran and of President Jacobo Árbenz in Guatemala. The toppling of Árbenz was done on behalf of the United Fruit Company for whom Allen Dulles was on the company’s board of directors, and brother John had worked as a lawyer. Allen Dulles remained in charge of US intelligence until 1961 when he was forced to resign after the Bay of Pigs fiasco. He was then succeeded by John McCone who continued the policy of coups and assassinations in the Dominican Republic, Laos, Ecuador, British Guiana and, more famously, against Castro in Cuba.

Later, when America made its second “pivot to Asia” in the 70s, it was Henry Kissinger who operated as the invisible hand behind Nixon’s dirty wars in Indochina. Shortly afterwards Kissinger turned those same genocidal talents to organising campaigns of state terror carried out throughout Latin America. Guilty of so much bloodshed, Kissinger is another who should be prosecuted for war crimes but instead at the age of 94 he now lingers like a putrid smell, visiting Trump twice already ‘to provide advice’ to the Oval Office.

Back in May, Kissinger met for a “bizarre unscheduled meeting” the day after Trump fired FBI Director, James Comey, and more recently in mid-October Kissinger popped by again. On this occasion the old warmonger told journalists “I’m here at a moment when the opportunity to build a constructive, peaceful world order is very great.” 2

When Kissinger talks about peace and the construction of a “world order” we have good cause to be alarmed. Investigative journalist, Philip Giraldi, a former intelligence officer in the CIA and founding member of the Veteran Intelligence Professionals for Sanity (VIPS), wrote in 2007 a detailed piece published by antiwar.com entitled “Henry Kissinger: Realist, or Neocon?” Giraldi says:

Kissinger is reported to be a frequent visitor to the White House, most particularly to the office of Vice President Dick Cheney, and has been a driving force to confront Iran. According to at least one source, he is the principal architect of the new policy to create a regional alliance of Arab states opposed to Iran while at the same time increasing direct pressure on the government in Tehran. President George W. Bush, Vice President Cheney, and Secretary of State Condoleezza Rice have adopted another recommendation from Kissinger that in effect abandons the “freedom agenda” for Iraq and the Arab Middle East in favor of focusing on Iran as a strategic menace to the entire region. The shift in emphasis means that during Bush’s last year there will be a major effort to resolve the Iranian nuclear challenge using whatever means are necessary. As diplomacy so far has consisted of shouting matches staking out adversarial positions, the only options that would be viewed as viable by the White House are military in nature. 3

America’s foreign policy has never been the preserve of the Commander-in-Chief but driven from behind by the Dulles brothers, Kissinger Associates, and now the neo-con faction who moved in to the White House under Ford – the first man appointed Vice President under the terms of the 25th Amendment, and the only person to have served as both Vice President and President without being elected to either office. The self-appointed neo-cons took complete charge of US foreign policy in the immediate aftermath of 9/11 and have effectively never moved out.

Tom Lehrer famously quipped that “Political satire became obsolete when Henry Kissinger was awarded the Nobel Peace Prize”. 4 So where is satire now that Obama has been made a fellow peace laureate? Where is it now that the incumbent US President talks of America being “locked and loaded” and retweets obscene fascist propaganda?

That said King Donald is the emperor without any clothes whatsoever. For his presidency represents the final unmasking of American imperialism. The Palestinians have long known that US peacemaking was a farce. Most Iranians knew it too. For North Koreans the war against America never ended in the first place. Now finally, we can all laugh out loud whenever America says it comes to broker peace.

In an article entitled “Trump Isn’t Unique” published the next day [Tuesday 16th] by Counterpunch, Ted Rall extends the same point and applies it to all of the presidents in American history beginning with George Washington, including Lincoln and FDR, and then finishing with Obama.

Folks are already saying: “Barack Obama will be inducted into the league of Great Presidents.” Obama, most Democrats have already forgotten, broke his promise to try for a “public option” in the Affordable Care Act. He went on languid vacations while the global economy was collapsing, handed trillions to bankers no strings attached and did nothing to help the unemployed and people whose homes were stolen by the banks. And he slaughtered thousands of innocent civilians with drones — people who represented zero threat to anyone — just for fun.

If that’s a great president, give me a shitty one.

1 From Strategic Air Warfare: An Interview with Generals (1988). https://en.wikiquote.org/wiki/Curtis_LeMay

2 From a transcript published in an article entitled “Henry Kissinger to President Trump: This Is ‘A Moment When The Opportunity To Build A Constructive, Peaceful World Order Is Very Great” written by Tim Hains, published in Real Clear Politics on October 10, 2017. https://www.realclearpolitics.com/video/2017/10/10/henry_kissinger_to_president_trump_this_is_a_moment_when_the_opportunity_to_build_a_constructive_peaceful_world_order_is_very_great.html

3 From an article entitled “Henry Kissinger: Realist, or Neocon?” written by Philip Giraldi, published in antiwar.com on September 11, 2007. http://original.antiwar.com/giraldi/2007/09/11/henry-kissinger-realist-or-neocon/