On March 9th, following the government’s derisory 1% pay increase offered to NHS nurses and in the midst of “the royal circus” surrounding Harry and Meghan, John Ashton spoke again to Double Down News:

John Ashton, who was Regional Director of Public Health for North-West England for thirteen years, has been a consistently outspoken critic of the government’s ineffective response to Covid-19. As the official death toll passed hundred thousand deaths, he was invited to speak on Double Down News and the interview is embedded below with my own transcript also provided:

A hundred thousand deaths and more. A hundred thousand grieving families. The Prime Minister says he’s sorry for the deaths and he gives a half-hearted apology for what’s gone on, but doesn’t admit any mistakes – any errors – “we did what we could”, he said, despite the litany of errors. I’m sorry Boris Johnson, it doesn’t wash with me and it won’t wash with all those grieving families out there who’ve lost loved ones for no fault of their own, but because of your arrogance, your pathetic incompetence, and your unwillingness to learn from experience. I’m sorry Boris Johnson, you are a disgrace!

I really take no pleasure in saying these were all things I’ve warned about all the way through and that the fact that there have now been a hundred thousand-plus deaths is no surprise to me – it’s actually well over hundred thousand: the Office of National Statistics [ONS] came out yesterday with I think 104,000 and that I think was from up to the 7th of January. There’s been about 7,000 deaths a week during the rest of January so it’s probably somewhere between 120 and 130 thousand. 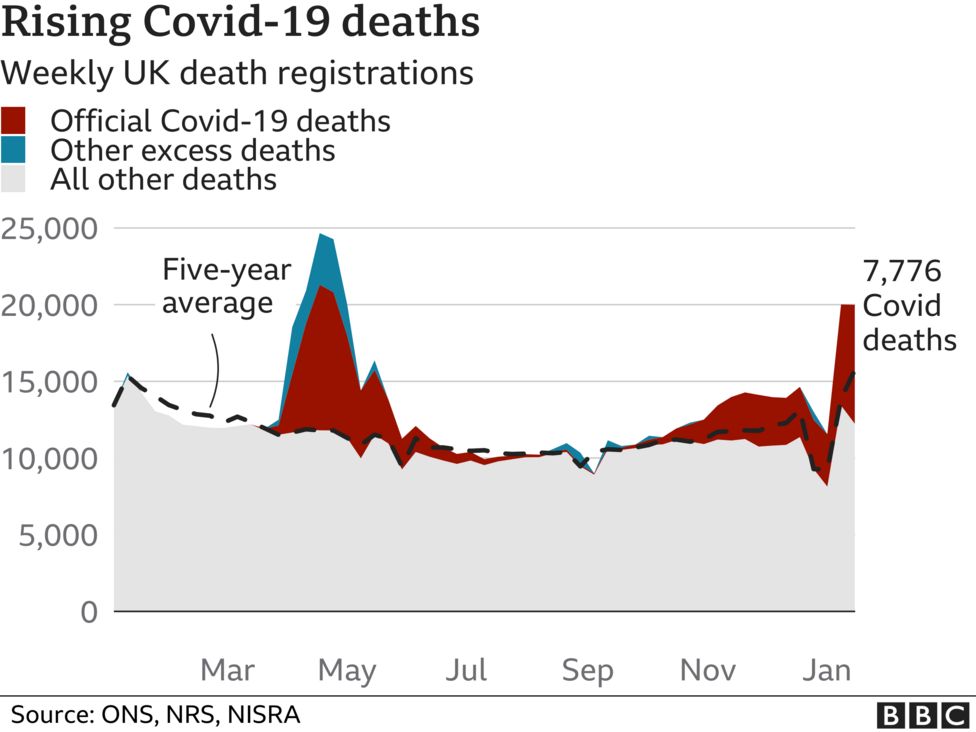 One of the really telling statistics is that during the pandemic of influenza in 1918–19 the number of deaths in the United Kingdom accounted for 1% of the total deaths worldwide. This 100,000 or 120,000 is now approaching 3% of the worldwide number of deaths. And you know in those days virology was new science – we’re now supposed to have world-beating science and medicine – and we’ve neglected our public health system in the way I’ve just described over and over.

My heart goes out to all the families, all the relatives who’ve lost loved ones. And there’s more come. You know some of the commentators yesterday suggesting between 30 and 50 thousand more deaths are likely before we might get proper control over this terrible situation. And then the Prime Minister has the gall to say sorry for the deaths but not really apologising, not admitting that he’s got so much wrong. “We did everything we could”, is what he said. But the list of things they got wrong – the list of omissions as well as commissions is so long.

At the heart of this there’s been a failure of leadership. We know that public health in England has been allowed to run down over ten years: that they stopped doing regular training exercises for pandemics; that they never learnt the lessons from the 2016 exercise which showed all the weaknesses.

But the leadership is where this comes to in the end: failure to get a grip in the beginning. Boris Johnson’s preoccupation with Brexit; his distraction by his mistress and having a fortnight’s holiday with her in February; not attending five meetings of Cobra; not getting on top of the testing and tracing, of the PPE; adopting an approach to messaging that was confused and highly political; messing about with the numbers, massaging the figures; not setting a good example himself (shaking hands with people and getting infected); and then his lieutenant Cummings and many other prominent people [Robert Jenrick for instance] not doing what they were telling other people to do; so that the trust has gone, people are not following the rules – if you look at the traffic now, the traffic is much higher than it was in the first lockdown – it’s very difficult to get people to do the right thing because they’ve been let down by abysmal leadership and hypocrisy.

The litany goes on and on, you know. All those contracts given to their chums: millions and millions of pounds; putting somebody who’s a horse jumper but with no experience in charge of the testing and tracing – Dido Harding; eat out and help out and spread the virus. You know don’t listen to the scientists when they talk about having a firebreak in the Autumn half-term. Let’s have five days for Christmas! It goes on and on and on. And what does Johnson say? “We did our best.” God help us if he’d not done his best. Just think what the numbers might have been then.

I just hope that they’re held to account at some time in the future, but I don’t have much faith in our system because it seems to cover up for them. And many of the senior medics and people have been very reluctant to criticise the government even after a year of this and I’m sorry [but] unless the lessons are learnt we’ll continue to make mistakes, and it’s really important to call a spade a spade and to identify what they’ve got wrong.

We’re still on 1,500 deaths a day, that’s likely to go on for some days, we don’t know how the vaccine story’s going to play out – there are supply chain rows now emerging [and] we’re being asked to take a nationalistic stance on that again, whereas you know Europe ordered vaccines and they’re being asked to let vaccines being made in European countries come to the UK because of failure of supply in particular countries – but we’re putting too much hope on the vaccine. You know the vaccine is very important but we have to keep up with all the traditional public health measures as well. We have to environmental measures, social distancing, hygiene, mask-wearing behavioural stuff. We’ve got to do that for the foreseeable future.

It’s a very bleak day today and yesterday to hear this news. My heart goes out to the families and I just hope that at some point in the future there will be justice for those families. We must all think about these families – these hundred thousand-plus families – hundreds of thousands of people have been affected. Most of us now know somebody who’s been seriously ill or who’s died from this disease. This is a terrible tragedy. There are many more people who’ve died than died during the war as civilians. This is unbelievable and terrible tragedy. We must think about people and we must support them. We must pull together. We must get through this. But when it’s all over we must make sure there’s justice for the families who’ve been treated so badly by Boris Johnson and his second-hand, second-rate lieutenants.