Eyad el-Hallaq, a 32-year-old autistic Palestinian, was chased and shot dead by Israeli police officers in occupied East Jerusalem on Saturday May 30th.

At protests taking place in Jaffa, Haifa, Jerusalem and in other Palestinian towns, demonstrators hold placards to draw attention to parallels between Hallaq’s death and the brutal killing of George Floyd that happened a few days earlier:

The man [Eyad Hallaq] was unarmed, and had fled the officers in fear, unable to communicate properly because of his disability. He died just a few metres away from his special-needs school, in East Jerusalem. The officer who killed him said he thought Hallaq was a terrorist because he was wearing gloves.

Shahd Abusalama is a Palestinian refugee and a postgraduate student at Sheffield Hallam. She recently shared a letter sent to her constituency MP, Louise Haigh, with the Sheffield Labour Friends of Palestine (SLFP)  and with her permission I am publishing it below.

Along with Shahd and SLFP, I encourage others to write to their MPs on this very serious matter.

My name is Shahd Abusalama, a Palestinian refugee and PhD student at Sheffield Hallam, living in your constituency. I supported your re-election campaign to keep you as our MP. I am aware of your longstanding activism for justice for Palestine and all people facing racism, inequality and discriminations, and I respect you for that.

I follow you on twitter, and I noticed many tweets for #BlackLivesMatter. Happy to see you speaking up against the systematic racism facing black people in the UK and the US, but if we’re addressing violence happening internationally, then addressing such racist systematic violence against the Palestinians is a must too.

You’re probably well-aware that systematic racism and dehumanisation is a disease shared between all states with a history of colonialism and slavery. These states empower each other through military, economic and diplomatic collaborations. And here comes apartheid Israel, which has dehumanised, dispossessed, imprisoned, killed and maimed us Palestinians for 72 years, since it’s foundation on the ethnic cleansing of our homeland. As a result of this event, I was born a refugee in Palestine’s largest refugee camp, Jabalia, northern Gaza, the world’s largest open-air prison. 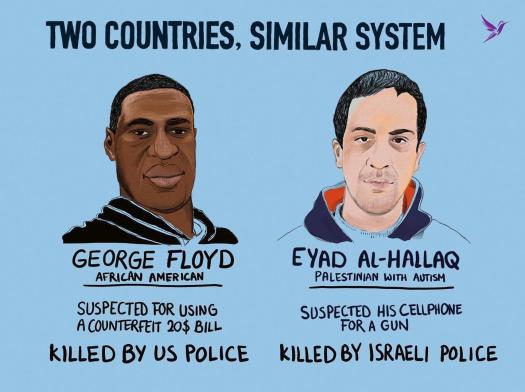 I would like to bring your attention to the case of Eyad Hallaq, a 32-year-old autistic Palestinian, killed by Israeli occupation soldiers on his way to Elwyn school for disabled people near Al-Asbat Gate in occupied Jerusalem’s old city on the morning of 30 May 2020. His disability makes him like a 7 year old child, and he has hearing and speech difficulties. Israeli soldiers claimed he was holding a ‘suspicious object,’ they thought it was a gun- he held a cellphone. When they ordered Eyad to stop, he started running out of fear. The penalty was death sentence. They shot 10 times! 10 bullets. Before the shooting, Halak’s teacher told Israel’s Channel 13 news that she had tried to warn Israeli police, shouting “He’s disabled! He’s disabled!” before they proceeded to gun him down. They still killed him, in cold blood as his mother said in a painful video. Still, after the shooting, they declared a state of emergency in the occupied Old City of Jerusalem, looking for a gun of their fantasy and found none. During that time, medics were barred from entering the area as poor Eyad was bleeding to death.

Such dehumanising treatment of Palestinians, as “disposable natives” is continuing since pre-state Israel, under British colonialism, and this is only the latest example. We are well aware that Zionism is Racism, as adopted by a UN resolution in 1975, and despite desperate attempts by Israel and its allies to conceal this and suppress reports exposing Israeli apartheid practices (see attached), this is visible and clear to anyone with open eyes.

The technique that brought about the lynching of George Floyd is widely used against Palestinians, including children! For years, there have been grassroots efforts calling for an end to this deadly military exchange between Israel, the US and the UK.  See the Morning Star recent article on the issue in light of the US, making it strikingly clear the connection between Israeli military and US police brutality, including the murder of George Floyd by Minnesota police who are trained in Israel.

I assume your knowledge about the Palestinian call for BDS until freedom, justice and equality is served in historic Palestine. I’ve also seen your support in the past for imposing arms embargo on Israel.

We are currently witnessing a historical moment of protests flaring up from Palestine to the US, calling for equality and justice. And the protesters are seeing the connections between Israeli practices against the Palestinian people, and those of US police against blacks and protesters.

We should seize this moment and speak louder about ending this deadly military exchange, in solidarity with the Palestinians and all people at the receiving end of their oppression.

Will you amplify this call both online and at the house of commons?

I look forward to hear from you!

In her reply to me, Shahd says that Louise Haigh MP:

Answered with a generic email to all people who wrote to her expressing their concern about George Floyd murder, and nothing was mentioned in that letter answering to my request regarding Iyad Hallaq or military exchange. So she definitely needs more voices to join to take me seriously.

Shahd wrote to me a second time and included links to share – one of which is the Tweet embedded above. This is her message in full:

Thanks for the link, I tweeted it.

On Saturday’s protest in Sheffield for Black Lives Matter, a guy with a camera called Mark Banaman approached me and made this video:

And if you’re on instagram, SHU PalSoc shared the video: https://www.instagram.com/tv/CBKxq-wFtcE/?igshid=xnjae96ykofj

2 responses to “Palestinian lives matter: the killing of Eyad el-Hallaq”